The Dragon, the Princess, Saint George

THE DRAGON, THE PRINCESS, SAINT GEORGE.
Series of 17 ink and acrylic drawings on paper (21×21 cm.) along with the cover.
Catalan Legend.

1. The Dragon, the Princess, Saint George. 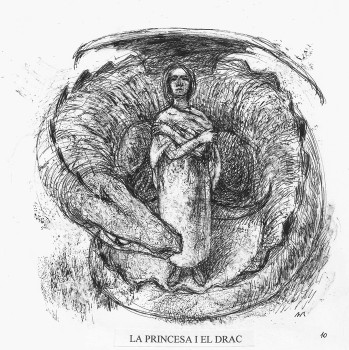 10. The Princess and the Dragon.

This series of drawings illustrates the legend of St. George without text, using just titles at the bottom of each one of them.

It should be said that the traditional story is taken using some licenses, as the title suggests reversing the order of the characters. Indeed, the Dragon plays a greater role than the one of the Saint: one might say that the first part refers to its misdeeds and the second to its death. Between one and the other part, right in the middle is the image of the Princess with the Dragon.

It begins, then, thinking of mischiefs and damages the Dragon might have committed, and gathering them up as sketches. These also served to define the beast (19) and also to try different styles and techniques (or, rather, several ways of using the ink technique).

The first drawing of the story presents the Dragon when arriving to the region (2). As it approaches from the air, the nest of storks on the church’s bell tower is what it sees first (3). The previous sketch on this subject, drawn with a roller ball pen, is larger than the final one and has been made in a more expressionist style (20).

Later the Dragon attacks a shepherd and his flock (4). The young man has the beautiful face that would correspond to the character of St. George who won’t be shown throughout the tale, as we will see. There are drawings and previous versions on the same subject (21, 22, 23). 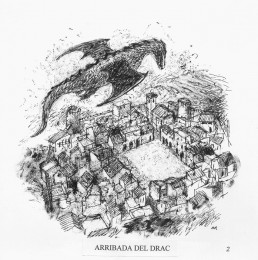 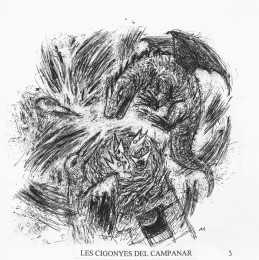 3. The stork and the bell tower. 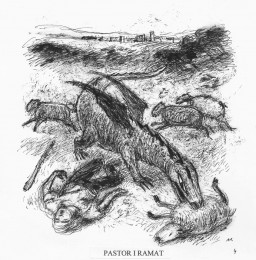 The magnitude of the preys continues to rise (5). There is a first draft of “Cattle” (made with a refillable ink brush “Pentel”) in which the victim is a horse (24), and another similar to the stork’s style (25).

Needless to say that the drawing of “The Lovers” (6) is the furthest approach from the orthodox version of the legend, in which does not appear anything like it. It is nothing but the resulting fiction from the situations that appear where the Dragon could alter the lives of the region where has installed. A first sketch depicts the young frightened couple (26), but the second (much like the final) (27) other nuances show up: he has already seen the beast, which is also looking at him, and he seems to defy it, while the girl still rests quiet. Therefore, the interest has been focused in the tragedy that is about to happen rather than the explicit presentation. 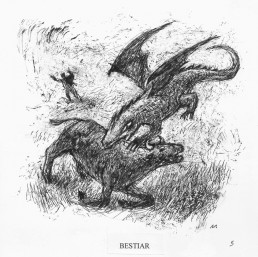 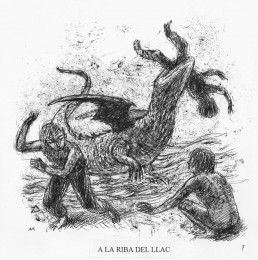 The drama breaks out again by the lakeside, where the monster emerges from the water and makes off with a child who is playing (7).

This is too much and the City Council must make a decision (8), and chooses to offer young men and women to soothe the Dragon. The thing is that at a given time, it is the king’s daughter’s turn. In “Sacrifice” (9), the king accepts the decision and locks himself in the palace so not to see the horror. In front of him is the crown, symbol of a power that does not help him much.

“The Princess and the Dragon” (10), the central image of the tale, does not imply any violence of the beast towards the youngster. Rather, it seems to offer her some kind of protection. A sketch showing a different relationship of sizes: the Dragon is much larger (28). 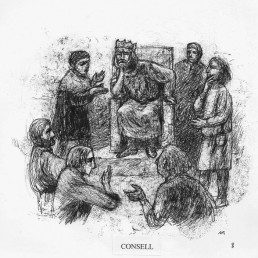 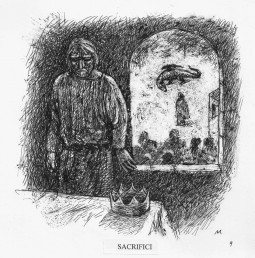 But now we can see Saint George having a dream where appears a girl pestered by very aggressive dragons (11). Of course, that is also invented. There were two other dreams, but were discarded (29, 30).

From here, the Dragon is doomed. Saint George decides to come forward and save her. It looks like an anonymous warrior, a kind of superhero (12). His armor reflects the images of the Princess and the Dragon.

Once the Dragon is hurt (13), he ties it up like a dog and offers it to the Princess to drive it into the city (14). There is a first quick sketch of this scene made with brush and Indian ink (31). 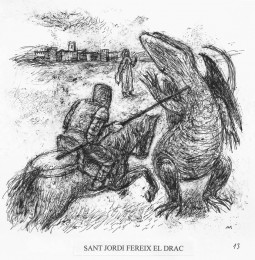 In the city, the Dragon will be beaten to death. “Ferocity”, the drawing that illustrates it (15), is a copy of a sketch happened “by chance” of an inkblot (32). The animal is turned into a simple dark mass in the center of the square (16). 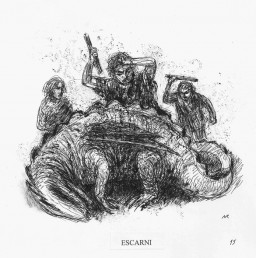 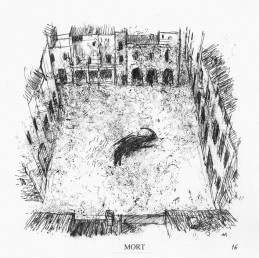 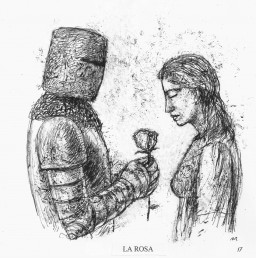 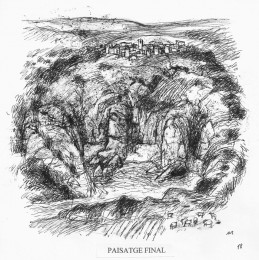 The idea of the rose bush resulting from the blood of the Dragon has been skipped and is passed directly to the moment when Saint George offers a rose to the Princess (17). He is still a faceless warrior.

The story ends with “Final Landscape” (18), a symmetric aerial view like the first one but larger, so that we can recognize the Dragon inside the landscape forms where the action has taken place. There is a brush version that is nearly identical (33). The idea might come from a much earlier ink drawing that depicted an anthropomorphic landscape (34).

The procedure used for all final drawings has begun by lightly staining the paper with inked gauzes for a textured background. Afterwards, the drawing has been built up with a roller ball pen and finally the details have been corrected with white acrylic. The paper type used has been “Basik” 21×21 cm.

As for the cover (1), it is a simple composition from the manipulation of a fragment of the drawing “The Rose” using Photoshop. 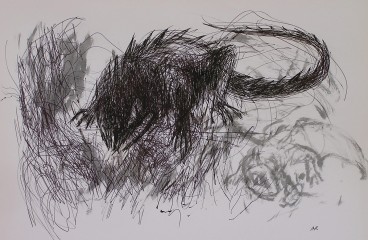 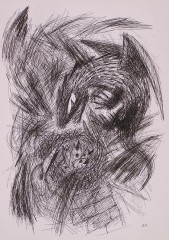 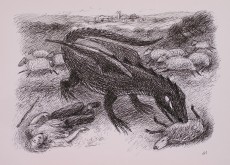 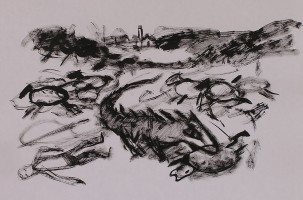 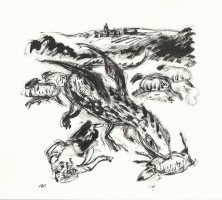 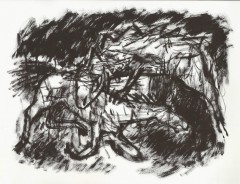 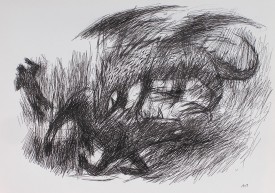 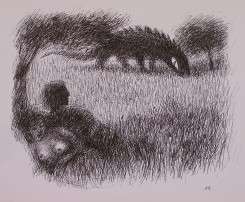 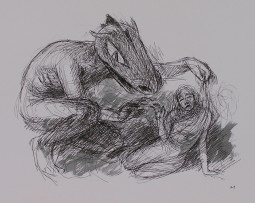 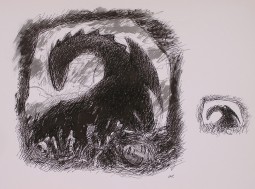 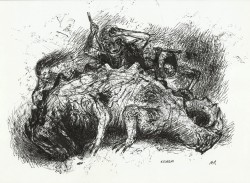 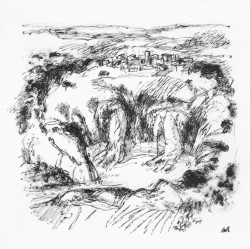 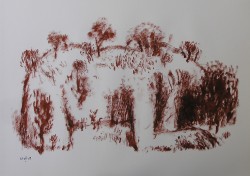